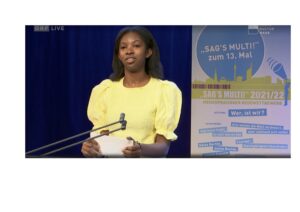 This year the MS Johann Hoffmann Platz took part in the Sag’s Multi bilingual speech competition for the first time. This year’s topic was ‘Who is we?‘, a complex one involving discussions on such issues as identity, migration, racism, integration in Austrian society as well as gender identity. We started with three candidates in the preliminary round, each choosing a different aspect of the main topic: Djenabou spoke about her experiences of racism (English/German), Kasra about his struggle to find acceptance and friendship in Vienna as an Iranian refugee (Farsi/ German), and Aurela spoke about the ongoing persecution and discrimination of people of the LGBTQ community in many parts of the world (English/German).

As newcomers to this competition, teaching staff chose to start off with brainstorming the main themes in German and English. The students then spent time alone reflecting on the issues they felt strongly about and began writing their speeches in their languages of choice. It was interesting to see how discussing these topics openly students were able to accept and tolerate viewpoints different to their own. When the exciting news came that all three candidates had gotten through to the next level one could see their confidence grow! In the next round, the main round, the students had to extend and develop their speeches. Due to Corona the students were not able to speak before an audience but filmed each other’s speeches and submitted the videos. They were incredibly supportive of each other in this process, giving constructive feedback on body language, intonation and where to pause for more impact. It was great to see how they appreciated each other’s ability to speak fluently in other languages.

We were amazed to hear that Djenabou and Kasra got through to the final round. Kasra had changed schools and unfortunately due to the stress involved chose to withdraw from the competition. Djenabou was able to give an inspiring speech on supporting girls to be who they are in front of a live audience at the ORF TV Studios. On the 26 June she will attend a celebration for all contestants at the City Hall where the winners will be announced. Hold thumbs for Djenabou!

Overall, it was an incredible experience for all involved. If your school has not yet taken part in this competition, I would urge you to give it a go in 2022/23! The Sag’s Multi team were helpful and professional, supporting candidates by giving individualized feedback regarding presentation and content at each stage of the competition.

Seeing young people stand up on stage and speak passionately in different languages about important issues in the world today was simply inspiring.

https://tvthek.orf.at/profile/SAGS-MULTI/13892751/SAGS-MULTI-aus-dem-Radiokulturhaus-Wien/14133179 (unfortunately the ORF have got Kasra’s name on Djen’s video and are unable to change this)

This website uses cookies to improve your experience while you navigate through the website. Out of these, the cookies that are categorized as necessary are stored on your browser as they are essential for the working of basic functionalities of the website. We also use third-party cookies that help us analyze and understand how you use this website. These cookies will be stored in your browser only with your consent. You also have the option to opt-out of these cookies. But opting out of some of these cookies may affect your browsing experience.
Necessary immer aktiv
Necessary cookies are absolutely essential for the website to function properly. This category only includes cookies that ensures basic functionalities and security features of the website. These cookies do not store any personal information.
Non-necessary
Any cookies that may not be particularly necessary for the website to function and is used specifically to collect user personal data via analytics, ads, other embedded contents are termed as non-necessary cookies. It is mandatory to procure user consent prior to running these cookies on your website.
SPEICHERN & AKZEPTIEREN